The Dark Peak with MOSI 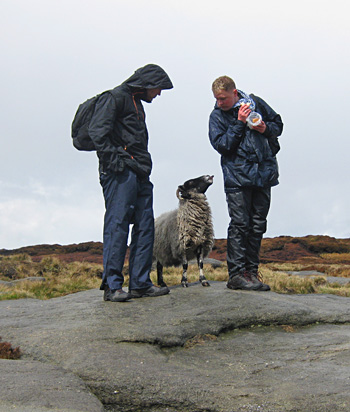 It had been a long time coming.  We’d been threatening to get out for a walk with our friends at MOSI for some time, and not just a stroll but a substantial walk with a few small challenges and of course topped off with a traditional pub finish.

Finally, a day was arranged. Hayfield in the Dark Peak area of Derbyshire was chosen as our starting point. As coincidence would have it, it also happened to be the 80th anniversary of the mass trespass of 1932, which started from Hayfield and, after which five ramblers were imprisoned for exercising their right to walk on the moors. Thankfully no such dramas lay ahead of us.

Heavy clouds rolled in and fully aware, though maybe not prepared for the forecasted hail, our party of 13 set off. Soon we were above Kinder Reservoir then followed William Clough and the final ascent to join the Pennine Way. A brief hail shower hit us but didn’t dampen the spirits. On to Kinder Downfall where, just as we sat down for lunch, another heavy hail shower hit us. Oh well, at least the local sheep kept us company.

We then continued along to Kinder Low trig point, actually the highest point of the whole walk and then the descent back to Hayfield and a well-earned pint in the Sportsman pub. Tiredness forgotten, everyone was soon talking about when we’d be getting out again. To the pub that is!