Smack My Batch Up : Batch Processing In Drupal 8 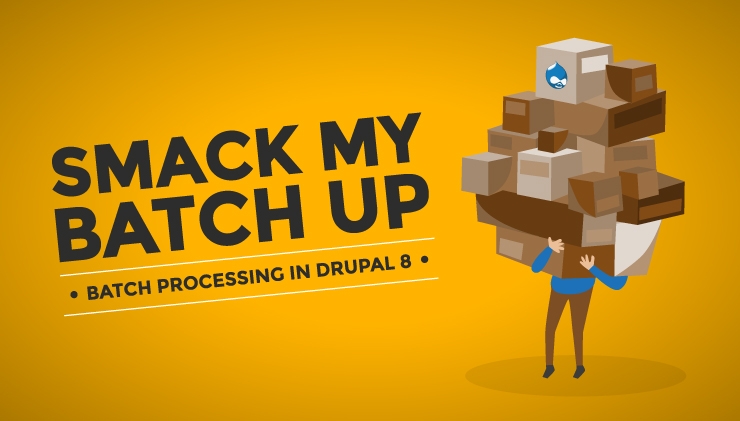 This beast of a meal is a 3.2kg fried breakfast with a two pint milkshake that must be consumed within an hour and defeats most people who attempt it.

Eating The Hibernator in one go is hard, but splitting it up into 300 little meals spread throughout a week sounds much easier right?

That's just what batch processing does - it takes a large amount of items and breaks them up into smaller chunks so they're easier to handle.

Batch processing is an important aspect of Drupal development that allows large amounts of data to be processed without putting undue stress on the server.

Rather than use a single page load to process lots of data the batch API allows the data to be processed as lots of little page requests.

This means that you can easily run through 10,000 items without using up all of the server resources in a single page load.

Plus, because the batch API uses the queue system you can pick up the batch from where it left off if there was an error in the processing. Previously, you would have to use long page load techniques involving set_time_limit() which also meant that if the browser (or computer) crashed for any reason then things would need to start from the beginning.

Some uses of the batch API in Drupal might be to:

When you initiate a batch run you are presented with a page containing a progress bar that fills up as the batch runs. This creates a much nicer experience for the user than running a lengthy page load operation. Whilst the batch progresses, the user is shown both the progress bar and any messages that are generated from the batch running.

In fact, little has changed other than the need to create routes, page controllers and form classes that control your batch operations. To setup a batch operation you need to construct an array that contains a number of elements. This array is then passed into the batch_set() function, which generates the needed setup for the batch inside Drupal.

Here is a breakdown of the array elements that are commonly passed to batch_set().

There are one or two other parameters that can be included in this array, but the above is enough to get up and running quickly.

How you have setup the batch page is important for the next step here. If you have setup an action in a controller then you'll need to call the batch_process() function, passing the destination page as the single parameter. If you are using a form submit handler to control the batch operation then you can leave this function call out as this is done automatically for you.

This involves knowing in advance how many items you have to process and feeding them all into the operations parameter, so that they are processed one by one.

As an example, let's say we wanted to process a list of all the lowercase English letters. To do this we would generate the letters (in this case using the range() function) and then create the array of function callbacks, one for each letter. This is then fed into the operations array.

This is sort of a silly example as the callback functions are processed so quickly that it's difficult to actually see the feedback.

This takes a slightly different route by setting only a single callback in the operations list. The first time this function is called it will figure out how many items it needs to process and will setup the batch context appropriately. This function can then be called multiple times until the limits are reached.

As an example, lets say we wanted to process a bunch of numbers. In this case we would create the operations array with a single item, which is the callback we are going to use. We send no parameters to the operation in this instance.

The callback function would look something like the following. We use the context parameter to store some information about the current batch run and set this up the first time. This 'sandbox' element is only used for the current batch run and is deleted before we are passed onto the finished callback. In the below example we are counting through the numbers from 0 to 100 in increments of 10. The finish parameter of context determines if the batch process should finish or not. If the value is 1 (or is not set at all) then the batch process will finish.

This approach is useful if you aren't sure beforehand how many items you are about to process, or maybe the number of items changes as the batch progresses. In this case you would adapt the above code to keep running whilst there are items left to process and stop once it has reached the end of the list. I commonly use this approach when processing CSV files of variable length.

Once the batch has finished (either by running through all of the operation callbacks or by reaching a finish condition) then the finish callback function is called. This function has the following parameters:

A typical finish callback might look something like this. This prints a message showing how many items were processed and prints out all processed items on to the screen.

This isn't a particularly useful finish function as batch processes will normally contain thousands of items in the results list and as such you shouldn't print them all out.

This is just for illustration purposes.

A common approach is to print any error conditions that might have arisen during the processing so that action can be actioned afterwards.

So what's changed in Drupal 8 for the Batch API?

Lots of the internal mechanics have changed in Drupal 8, but the main processing of of the batch run is done by the same few procedural functions from Drupal 7 with a few core Drupal 8 objects involved.

The actual batch processing is all controlled by the new BatchController controller, with a route of '/batch'.

So, when running a batch this page is called over and over again until the batch completes.

The BatchController runs the procedural batch functions and returns a minimal response, which makes sense, as this creates a very minimal footprint to the batch processing. You don't want a lot of processing to be done around your batch operation, you just want the batch operation to run as quickly as it can.

Batch API in the real world

When developing complex operations or dealing with user uploaded files I normally start off with a simple batch API implementation and then expand from there.

Using batches greatly reduces the impact of these complex operations on the server and allows you to adapt to problems without having to start from the beginning.

As a real world example, I recently had to take a user uploaded XML file and create a node from each component in that file, which is usually about 200+ nodes.

As the generation of these nodes required a call to an API the batch processing became extremely important as processing all of this data in a single page load would take several minutes. This also meant that if the API failed for some reason then I could simply adapt to the failure and continue the batch run, returning a list of items that weren't able to be processed at the end of the run.

If you are interested in finding more out about the batch API then a good starting point would be the batch API documentation on Drupal.org.

Upgrade your site to Drupal 8

Want to upgrade to Drupal 8? Talk to our team today.