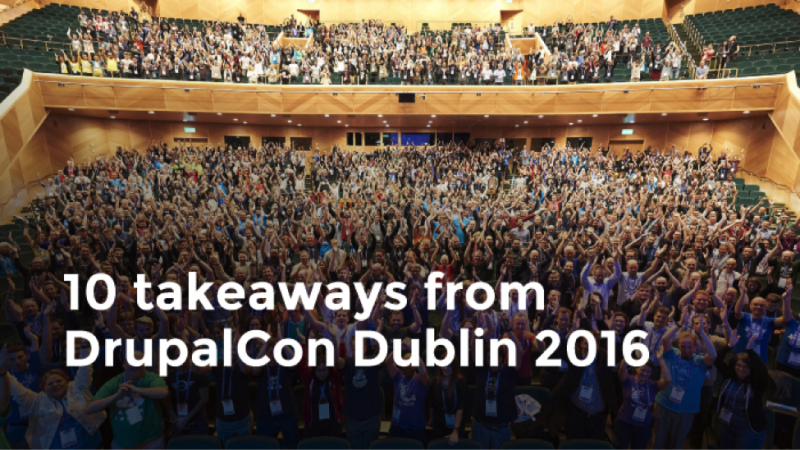 Like the taste of fresh Guinness, DrupalCon Dublin certainly didn’t disappoint. Drupal is built on its open source community, and being in attendance at Drupalcon made me proud to be part of it. DrupalCon proved that this community isn’t just centered around web development.

If you missed DrupalCon Dublin, fear not, I’m going to share what I’ve learned. It was an incredible week and my highlights prove it.

Takeaway #1: How to use core module Tour

I discovered how to use the core module,Tour. This is a new module in Drupal 8 and it allows developers to create tutorials within the website. It basically allows you to create step by step instructions to users on how to use a section of the CMS. I will definitely use this feature for production sites.

Takeaway #2: Drupal 8 is not perfect

Creator of Drupal, Dries Buytaert, was excited with Drupal 8 so far, however he knows there is still work to be done.

This is because of the complete architectural change of how Drupal works.

As a result, a lot of contrib modules still need to be ported and more people need to be educated on the benefits and how to use Drupal 8. However, the changes that have been implemented will ensure Drupal’s relevance for a long long time to come. 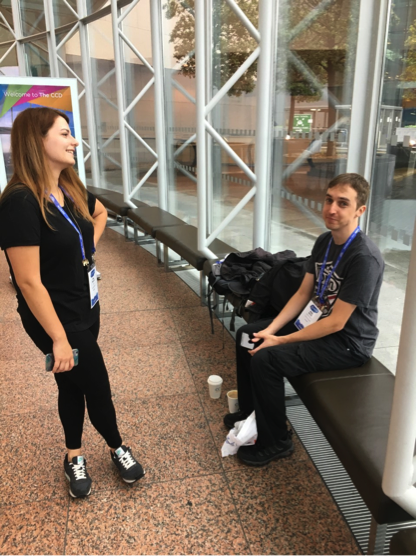 Takeaway #3: Changing a menu on Drupal is now easier

You can do this with the new settings tray that has been developed.

It gives editors an outside-in experience meaning that you can click anywhere on the page, update its content and immediately see that change take place.

With Earlier versions of Drupal 8 and 7, this type of task was somewhat laborious. In fact, when redefined and developed to work with more aspects of Drupal, it could be a massive game changer for Drupal’s usability.

Takeaway #4: The Rest API has also been improved

This means it is easier to set up and is more robust. Thanks to this improvement Drupal can now be used by more diverse applications.

As a consequence of the Rest API improvements, it was also interesting to see Dries question whether or not Drupal core should adopt a JS framework. Something to watch out for.

Many of the attendees gave the advice to look beyond Drupal when it comes to development.

I realised how important it is as a developer to tinker more with other technologies because it broadens your horizons and can help you tackle problems more effectively. You can’t expect to be inspired by looking at the same systems every day and it’s always good to challenge yourself.

At Access, we already employ a lot of the best practises that were described in the session, such as adhering to Drupal’s coding standards via the use of linters, utilising PHP mess detector and automatically scanning code to check for such errors when adding hunks to a git repo.

I found that we could improve our standards by adding more checks automatically that integrate our simple tests, unit tests and behat tests in with our deployment process. 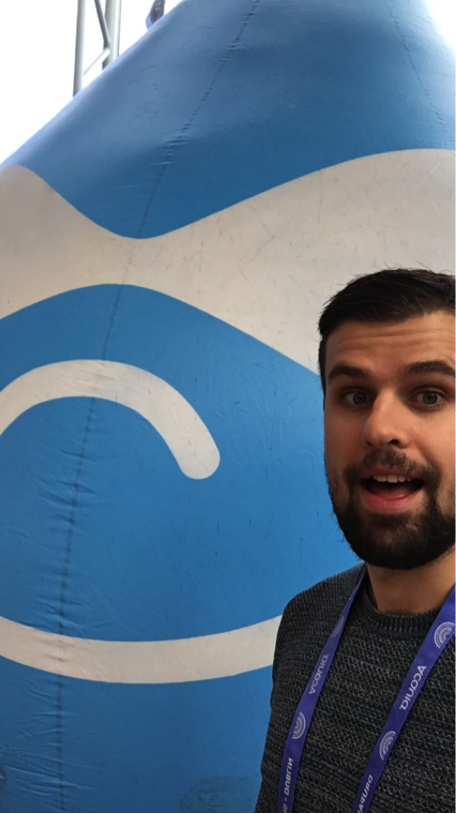 Me enjoying a giant logo selfie.

Takeaway #7: How to develop your business

I mistakenly attended a talk about how a director of an agency developed his business - a talk which I had previously thought would be regarding Ecommerce.

I was glad I made this mistake.

It gave me a good insight and better understanding of how other multi-national digital agencies work on projects (not always necessarily Drupal projects), from learning how to quote more accurately to making sure that you have extremely detailed reporting metrics.

It was explained that it is important to keep control of a business by keeping a good oversight into what is going on. Strong visibility, tight control.

Takeaway #8: The difference between Composer Install and Composer Update

It is also important to have a strategy on using the semantic versioning system.

You can improve the performance of Drupal websites by processing data returned from MySQL by simply using it instead of using PHP.

Rather than using PHP to calculate someone's age in years based from their date of birth, you can do this using MySQL instead by doing the following in a query’s select statement “TIMESTAMPDIFF(YEAR, date_of_birth_value, CURDATE()) AS age”.

MySQL 8 will also include a new JSON type which will provide functionality to allow easy search facility of the JSON data.

Takeaway #10: Drupal can be life changing

Whilst working in a digital agency you get a sense of accomplishment when you develop web applications that improve businesses.

I discovered that Drupal had a profound impact on communities, individuals and organisations from across the world.

Is DrupalCon worth it?

Overall, I saw some interesting talks from project managers, company owners and even some from outside the Drupal ‘realm’ (MySQL). Attend DrupalCon if you want to truly immerse yourself in the Drupal community. It’s worth so much more than its talks - you also get to meet incredible developers and pioneers in the field. I left feeling inspired and uplifted.