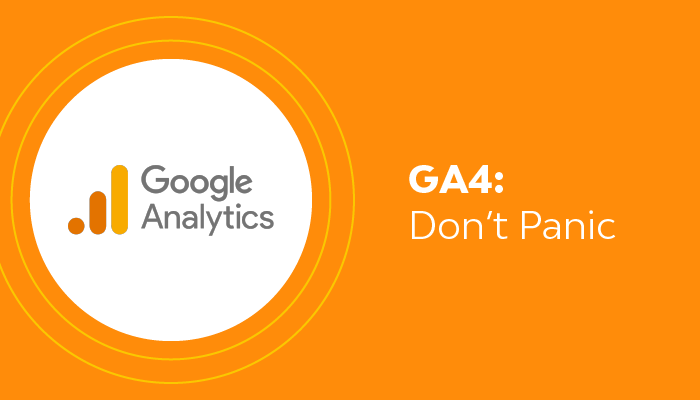 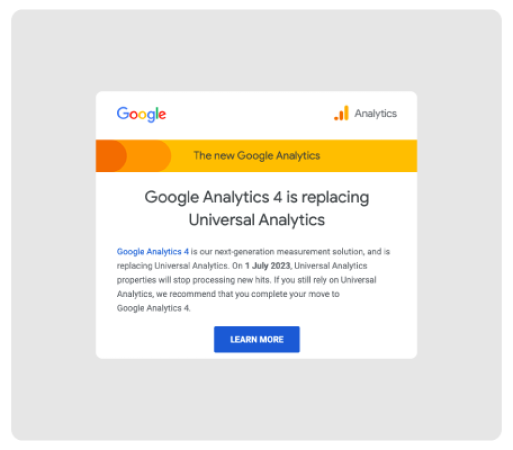 ...or noticed this banner on your Google Analytics:

So, what is happening?

Universal Analytics (UA) is the current version of Google Analytics and is widely adopted by site owners to track traffic and usage on their sites. Google has now told us that we have until July 2023 until UA stops being supported.

The announcement has prompted some concern amongst it's users. What is the next step for my analytics? How will I track current and future activity? Google Analytics 4 (GA4) is the answer.

Where are we right now?

Universal Analytics launched nearly a decade ago. You might recognise the interface since this is generally what people think of when you say “Google Analytics”.

Universal Analytics uses a measurement system that is based on 'Hits'. In UA all interactions like 'Page Views' that are being measured on site are attached to 'Sessions', and 'Sessions' start from when a user enters the site to when they exit (or time out) and they’re the overarching metric the individual interactions are attached to.

The only higher level metric than 'Sessions' is users which can persist over multiple sessions with the help of cookies.

One of the 'Hit' types in UA is the 'Event Hit' type. This can be used to create custom tracking where UA doesn’t have the capability to measure particular interactions (like scroll depth) UA only allows custom events to track 3 pieces of information, known as 'Category', 'Action' and 'Label'.

Where are we going?

So the old familiar version is leaving us and isn’t going to be valid any more. What are we going to have instead?

Google Analytics 4 was initially rolled out in 2020, but it was nowhere as full featured as it is today. It has developed over time to provide a new more adaptable version of Google Analytics.

Instead of tying tracked interactions back to 'Sessions', GA4 takes a less hierarchical approach with interactions being counted as individual events with attached parameters (essentially little pieces of contextual information for each recorded event).

If we take the example of a scroll event you’ll have a list of parameters, for example, where on the site it happened, where the user came from or how far they scrolled.

This setup means that reporting is a lot more flexible and a lot of these parameters are able to be configured within the tool.

The possibilities for custom tracking have been greatly expanded. GA4 now allows you to attach up to 25 custom parameters to events, producing a much more detailed picture of the context of the event.

What are the other differences?

There are a few other differences aside from the measurement systems which are worth touching on.

At the time of this blog GA4 doesn’t have any traffic limits. UA has a 10m hits a month limit and requires a subscription to a paid version (GA360) to measure any higher. While this is good news initially, it’s one to keep an eye on as this could change as the move to GA4 progresses.

But you can export data from GA4 to Google BigQuery for free! Google BigQuery is Google’s cloud data warehousing solution and allows larger scale analysis to avoid sampling (where google analytics processes a portion of your data and interprets the results).

GA4 tracks more metrics out of the box

In GA4 there are more metrics that are available without extra custom setup. Things like scroll depth, video progress and file downloads are all part of GA4 out of the box whereas these events would have to be set up for UA in Google Tag Manager or directly in the code of the site.

Some metrics have changed, bounce rate is gone(!)

In GA4 some of the old familiar metrics from UA are gone, most notably bounce rate. However it has been replaced with a more sophisticated and (hopefully) more useful metric, 'Engagement Rate'. 'Engagement Rate' measures the rate at which users perform at least one of the following actions:

GA4 is built to track apps as well as sites

GA4 was originally called Google Analytics APP and web. It’s set up to provide analytics for your app and your website.

What should we do now?

Get set up on GA4 as soon as you can.

Because of the changes between the two versions, historical data in UA will not be comparable to the data coming into GA4 so getting GA4 working will set you up for year on year reporting in 2023.

You will have a chance to play around with GA4 and get used to the fancy new features in your own time instead of subjecting your team to a mad rush in late June 2023.

As GA4 is a separate service, setting it up will not impact your existing setup.

In the end, don't panic. If you’re unsure about any of this please do get in touch with [email protected] and we can go into more detail about how we can support, and even improve, your analytics setup.