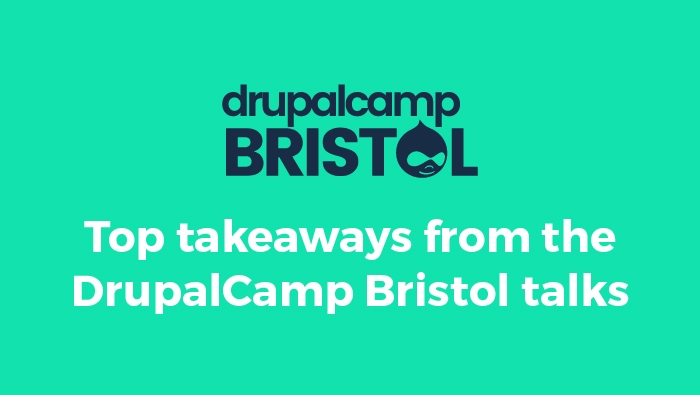 It’s a sunny Saturday morning and I’m in Bristol attending my first DrupalCamp. We make our way to the University of Bristol’s School of Chemistry. There are plenty of talks to pique our interest. I’m going to take you through the ones that engaged me the most and give you some key takeaways from each one.

‘Open Source: Self Care and Supporting Others’ by Emma Karayiannis

The day kicks off with Emma Karayiannis’ (@embobmaria) “Open Source: Self Care and Supporting Others”. The talk addresses the problems developers might face when working on big projects, and how taking on such a responsibility can have an impact on your mental health.

It’s always interesting to hear from experienced developers about problems that can, and do, affect us as developers. The talk also went into how to communicate online. And how, for the most part, when communication is predominantly text-based, our words can be misinterpreted. This can turn seemingly harmless messages into something that could potentially hurt someone.

Key takeaway: The written word doesn’t have tone, so be aware of what you’re saying to colleagues. 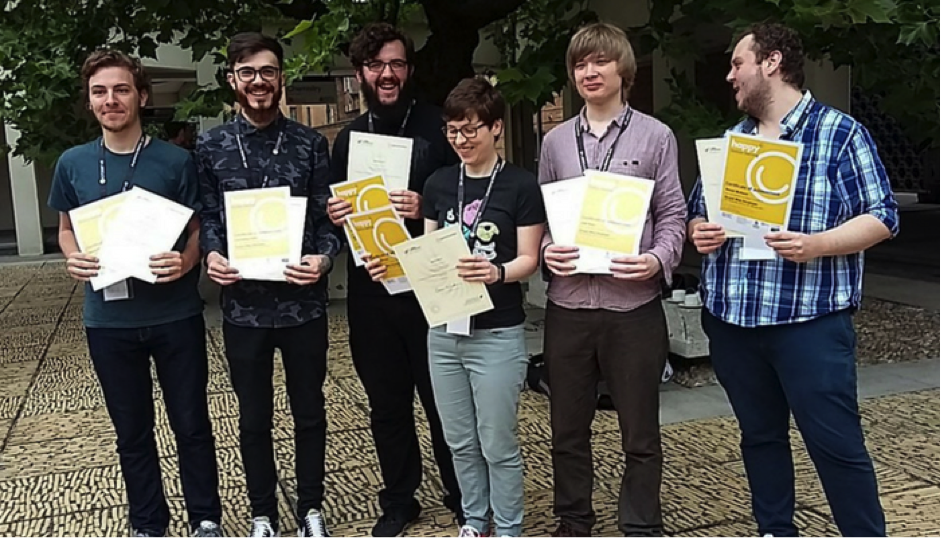 “Is what you’ve coded what you mean?” by Dave Liddament

The next talk is by Dave Liddament (@Daveliddament) titled “Is what you’ve coded what you mean?” David talks about how using an editor like PHPStorm gives hints where something might not work as you intended - and explains why it is warning you about a particular piece of code. The main focus of his talk was about the cost of fixing bugs.

He also touches on how to make sure you catch the bug early and how writing code as simply as possible, helps to ensure it is easy to understand later on. To demonstrate, Dave shows some common bugs and how to spot a problem earlier.

One of the most helpful tips Dave gives is how, in PHP7.1, you can now tell a function what type of data will be returned which, in turn, helps you figure out what you are passing through if you are looking at the code yourself.

Key takeaway: Your code needs to be clear, not only for other developers, but for yourself as well. 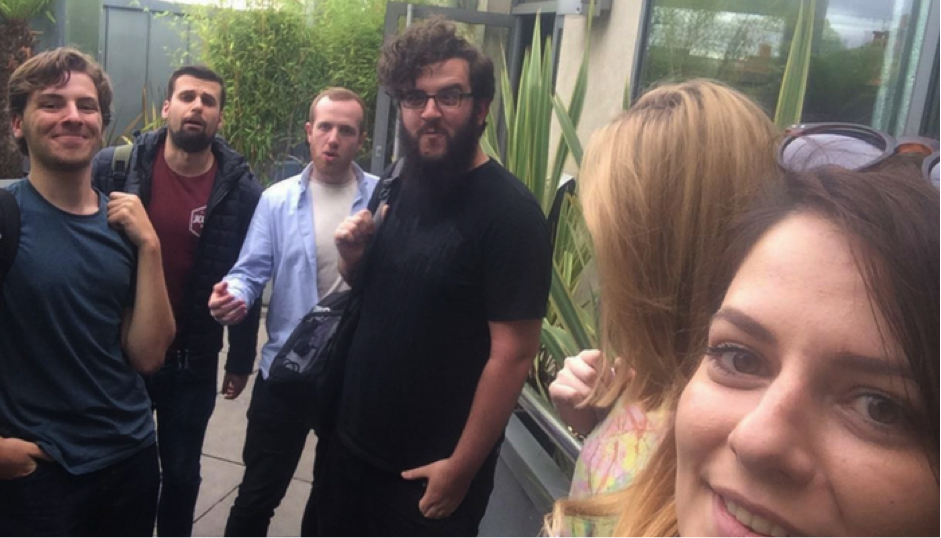 Irina, Michael Chadwick and Lois Keogh with friends at the conference.

“Pattern libraries: how to make your backend love your frontend” by Keir Moffatt

Next is freelancer Keir Moffatt’s “Pattern libraries: how to make your backend love your frontend.” His talk focuses on how pattern libraries changed the way Keir develops his front-end and how to hand off work as a freelancer, as well as the benefits of using a pattern library to do this.

As a freelancer, Keir is often working on projects with an end goal of giving it to a development team, meaning handovers can sometimes be difficult. Keir explains how to keep things simple so that there aren’t problems when handing over to another team.

Key takeaway: Be kind as freelancers, keep your code simple.

George Boobyer’s (@ibluebag) “Website insecurity - how your CMS site will get hacked and how to prevent it” pulls the largest crowd of the day. His talk features the fragilities of websites and the ways you can make them less vulnerable by taking simple, but effective measures when building them.

Detail was given on the steps that people take to get hold of private files, why you should configure your file permissions correctly and always carry out security updates on both core and modules.

George points out that weaknesses on a site can lead to unhappiness in real life. Digital security has real world implications - it can ruin lives. Undoubtedly, there were people in the room that might not have considered this a priority and now have it at the front of their minds.

Key takeaway: Configure your file permissions on both core and module.

Next, Miggle’s Louis Satwell and Adam Browne delivered: “Decoupled UIs - what we've learned from building Drupal sites which don't have a standard front end”. Their talk included an impressive project they had worked on. They tried to imagine how Drupal would interact with a CMS that didn’t yet exist - all in all a pretty abstract concept.

They then stress the importance of experimentation time. By giving themselves time to think creatively, the team were able to code Drupal to interact with Amazon’s Echo. Their experimentation lead to them making a module where they were able to alter the results Echo came back with. The query they created would bring back the edited result until they reset the Echo.

Key takeaway: Giving yourself time to experiment and think creatively is key to personal development. 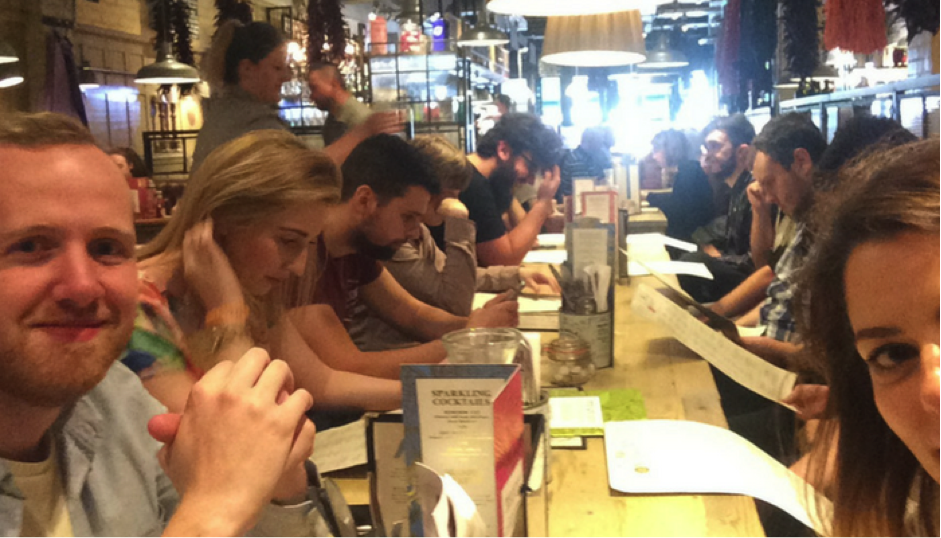 The team enjoying a well deserved break after a full day of talks!

Learning comes with time and effort, but knowing what personal qualities you need as a developer is equally important. As was the focus of Johan Gant’s (@_johangant) “Develop Developing Developers” talk. Johan covered what makes a good developer as well as the potential pitfalls developers face, such as burnout or imposter syndrome. Something, I’m sure, a lot of us can relate to.

“Code reviews and how to improve them” by Lee Stone

Finally, Lee Stone talks about (@leesto) “Code reviews and how to improve them”. His talk tackles the problems of working with people in varying time zones. He demonstrates a system he has in place which slows down code sprints, but allows everyone in the team to get a feel for at least one other project; even though they aren’t next to each other. This system also helps with best practice measures; coding standards are kept high and nothing gets sent without it reaching the team’s benchmark.

Lee said that ultimately, they do benefit from code reviews, but he did also say there are some things they could improve on, for example, how people don’t like to review their manager's code even though he makes mistakes too.

Key takeaway: Sometimes output may be slower, but standards will be higher.

Overall I feel like I gained a lot from my first DrupalCamp. I’ve taken away many insights into how other companies operate, not only with workflow but also in managing other people. DrupalCamps are also a great excuse to step away from Slack and talk to people in real life. Massive thanks to Access for further developing our skills and taking us down south. Bristol, you were great!