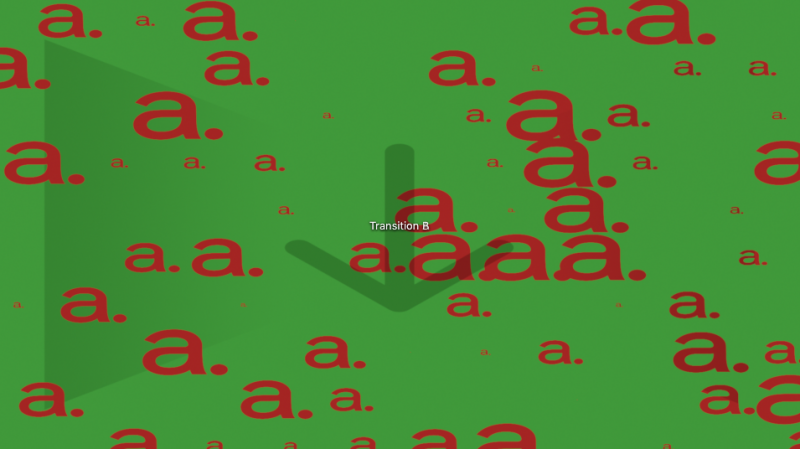 Final Cut Pro X is my non-linear editor of choice. I’ve used Final Cut from version 4 through to the last ‘Pro’ version 7 and into the hated by many FCPX. In my opinion, FCPX is far superior to it’s most popular rival; Adobe Premier.

As a full Creative Cloud subscriber, I have access to Adobe Premier, but I prefer to edit in FCPX. One of the many things I love about FCPX compared to Adobe Premier is the real time engine. The ability to quickly apply colour adjustments, effects, generators and titles on the fly and have them update before your eyes.

However, like many people I find myself having to go into After Effects to accomplish certain things that I think are either not possible to do in FCPX or would take too long. This can be a problem as you have to render out what you’ve created in AE then import back to FCPX and if anything changes, you have to do it all over again.

Apple have their own ‘alternative’ to AE called Motion. I say alternative carefully as it’s nothing like AE. I opened Motion years ago, took one look at the confusing mess and never opened it again. Not only did I not understand anything I saw in the interface but I just didn’t grasp what it was really for.

The biggest benefit to using Motion is the ability to create your own effects. You can create custom Transitions, Titles and Generators which, when saved are instantly available in your FCPX project. Text will be fully editable, you change typefaces on the fly and make changes to scale, position, colour etc. and all without having to render out any clips.

You can purchase prebuilt editable effects from places like Pixel Film Studios most are around $30 each, and all of those will have been built using Motion.  There’s also completely free resources like FCPXFree that’s another thing about FCPX, there seems to be a much bigger community creating free stuff because of the nature of FCPX, that it’s easy to share. You don’t need Motion to use stuff that other people have created, you just have to file it in the right folder inside the default ‘Motion’ folder that your installation of FCPX will have created.

I decided to look at Motion again, followed a couple of tutorials on YouTube then decided to see if I could build a transition. I wanted to be able to use a logo as an image mask in a transition between two clips, obviously have the ability to change the logo, and some control over the size and positioning.

You can change the name of ‘Phill’s Transitions’ to whatever you want, free transitions or drop it into an existing collection.

Now, inside FCPX when you go to the Transitions browser you should see whatever you renamed the folder to and when you click on that, you’ll see ‘Logo Transition

Drag and drop the transition between two clips. Click on the Drop Zone and choose a logo you’ve already imported, this should be a .png file with transparency.

Make sure you click the ‘Apply Clip’ button before moving on.

The first two sliders control the size of the logo inside the drop zone container. Depending on the size and resolution of your original, adjust until you can see all of your logo.

’Scale’ controls the size of the drop zone container.

Columns, Rows are the number of times the logo is repeated. This ONLY has an effect when the ‘Arrangement’ is on the default ’Tile Fill’

You can change the ‘Arrangement’ to Random then use the ‘Replicate Seed’ to randomly change the starting placement of the logos. When in Random Arrangement mode, The ‘Columns and Rows sliders have zero effect.

Play around with the controls, if by the end of the transition, the second clip hasn’t completely come through you can increase the ‘Scale’ value. The slider will only go to 400% but you can type any value you like in there. Try increasing the ’Scale Randomness’ slightly in conjunction with the scale. 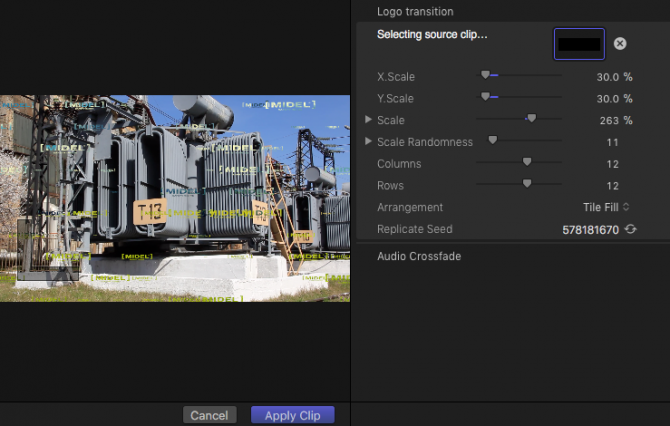