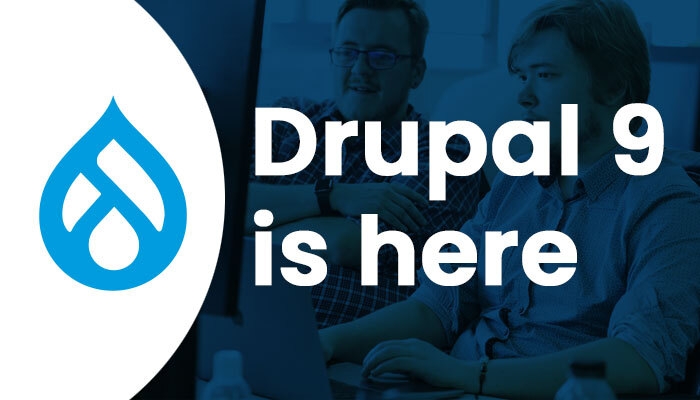 The day the Drupal community has been waiting for has finally arrived, with the Drupal 9 update now live! Described as the ‘easiest major Drupal upgrade in a decade’, the excitement for this latest update is felt across the globe - but what new features and functionality does this move actually give its users, and what do I need to prepare?

Drupal 9 is the latest update for the Drupal CMS, which launched 3rd June 2020. The big deal is, it isn't a big deal! This latest upgrade will be simple, where new features will constantly be added, meaning this isn't the big bang update like moving from Drupal 7 to Drupal 8 was, but a faster and continuous delivery of improvements. For example the recently added admin theme, Claro, which was added in Drupal 8.8 will carry through into Drupal 9.

As well as that, the other major benefit of Drupal 9 is the simpler and faster upgrades - "Drupal 9 brings forward all the features from Drupal 8 and carries on its continuous innovation with new features twice a year.".

With a great deal of effort by the community to prepare the contributed module space for Drupal 9, many initiatives are either issued already or are in planning:

How complex is the upgrade? And what does it mean for my website?

It is primarily a clean up of legacy code and deprecated features from previous versions, so think of this update more as a house cleaning exercise before adding any new code or features, rather than a complex upgrade.

In November 2022 and onwards, Drupal 8 will only receive support in the form of security patches, but no new innovations or developments will be fully compatible - these will primarily be for Drupal 9 only. Drupal 9 is therefore more about upgrading to not get left behind, rather than the upfront features it provides. So if you’re wanting a future-proofed website that will not only include the above initiatives in time, but will be the only version at the forefront of new Drupal innovative features, Drupal 9 is for you.

An illustration of the latest Drupal versions, and where they crossover - Drupal.Org

How do I update to Drupal 9, is it the same for Drupal 7 and Drupal 8?

Throughout the lifecycle of Drupal 8, Drupal 9 has always been on the horizon. Therefore, the community has made the progression to Drupal 9 as painless as possible, with the latest Drupal 8 (8.8.0) release being built to be very closely related to Drupal 9 to allow a smooth transition.

Unlike the arduous transition from Drupal 7 to 8, which involved a lot of effort for developers in regards to code changes, migration steps and adapting custom code, upgrading to Drupal 9 from Drupal 8 is more similar to a minor update.

If you’re on Drupal 8, moving to Drupal 9 shouldn’t require too much effort if you follow these steps:

If you are, however, still on Drupal 7, it’s going to be more of an upheaval to upgrade to Drupal 9. The way we’d recommend is to build a Drupal 9 site on it’s own, and then migrate the existing Drupal 7 database onto this new site once ready. Therefore, it’s not as simple as updating modules and code, it needs a full scale migration to get the most out of the move.

Does the website need to undergo an audit before transitioning?

If you’re wondering whether a full website audit is needed to move forward - our answer, is yes. For us it’s more ‘necessary’ than a ‘nice to have’, this is simply because for a smoother transition, you’ll want to make sure everything is prepped and ready for Drupal 9 compatibility. However, we are not talking about an in-depth comb-through of everything - we’re simply saying that a module codebase scan suffices in checking if you’re ready to move. And tools like Drupal-Check can help you do this.

Also be aware that some modules might no longer be upgraded moving forward, so won’t have the compatible code to update to Drupal 9. While this might feel like that they’re going to be left behind, all is not lost as you may be able to liaise with the module owner if absolutely necessary to ask if you can take it forward to the new version with you.

Does the size of my website affect how easy it is to update, and how long will it take?

Drupal websites vastly differ in scale, size and functionality, but you might be wondering whether that’ll have an impact on how easy it is to transition. In the end, the size or number of pages your website contains will, because the more there is to update, the larger the chance the audit will highlight modules yet to be compatible that will then need to be actioned.

Then again, the number of contributed/core modules that are easier to update vs how much custom code you employ does impact this too. A site might have 4x the number of pages of a smaller one, but if that smaller site uses more custom code, they could take an equal amount of time to make the move.

Time-wise, if you’re on Drupal 8 and your audit comes back with no deprecations, you’re good to go. And even if you’re not fully ready, we’re talking days not weeks in achieving this. For those still on Drupal 7, however, you will need overall more time, resource and budget to strategise moving to Drupal 9.

What skills/resources are needed to manage this update?

While marketers/content editors may have the skillset to manage updating modules, we’d advise a Site Builder to assist in the overall progressing to Drupal 9. As while the front end management of content can be fulfilled by these roles, extra technical support will update your site more likely correctly and efficiently.

If it comes to transitioning custom code however, a developer will be needed to aid in swapping out module deprecations, because even though some may be easy, others may need more deeper involvement and therefore a developer would be advisable.

So there you have it. Drupal 9 is probably the least significant update in terms of new features and code changes, but probably the most significant ever in its ease of upgrading and promise of faster, simpler and more frequent innovation.

If you’d like to understand more about Drupal’s latest version, and how you can upgrade, then do get in touch to discuss how our specialist Drupal team can help.