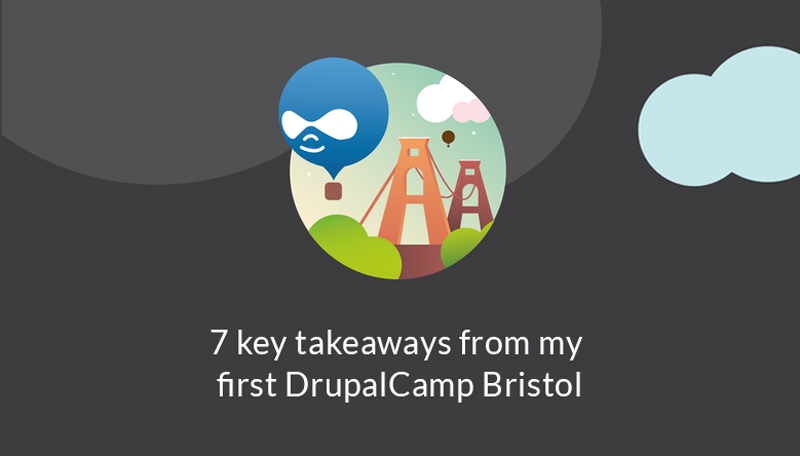 There’s four of us stuck in rare mid-summer heat on the M6.

The inevitable summer holiday traffic has duped us.

I’ve worked as a web developer for four years and I’ve yet to attend an event like this.

Not only do I get to see my colleague Ash Johnson present his talk, The Project Management Toolbox, I also get to see other Drupal experts and enthusiasts from the community.

And we’re all going to talk about one thing; Drupal.

The excitement is palpable; a tweet has even been written.

They inspire you to approach your work differently and to see Drupal in a new light.

They make you a better web developer.

And that’s what I’m going to do. I’m going to share seven takeaways from the weekend and, in turn, inspire you too.

We were all amateurs once. It’s also true of their first talks or their first open-source projects. It’s by sharing ideas that we can see others in the same position as ourselves - and celebrate those who have overcome their own fears.

The introduction to the Camp was a talk by Jeffrey McGuire and Chris Jansen called “Challenges and solutions in getting your open source company to contribution”. They tackled the issues that most developers face when they first want to start contributing to Drupal. Chris had experienced most of these roadblocks before overcoming them and is now a contributor to Drupal.

Having someone explain how to break down the barriers that stop most developers from giving back to the community was inspiring and helped to make it clear, if you’re feeling it - someone else probably is too.

Next up; Ashley Johnson giving his talk on the Project Management Toolbox. Seeing one of our own pluck up the courage and address a crowd was inspiring and his talk wasn’t that bad either.

Ash focused on showing people the tools and software we use at Access, making our working lives easier and boosting collaboration and efficiency. There is bound to be something on his list that will be of use to everyone if they have not already discovered it.

Key takeaway 3 - Offline for the web is not a pipedream

The next talk was more of a technical one. Erik Erskine presented “Offline First” which, as a front-end developer, I thoroughly enjoyed. Erik showed how to use progressive enhancement to build websites with offline capability so that people can view your content regardless of where they are.

So, if a user has visited your site before and then they go back to it and find themselves offline due to poor connectivity, then they can still read your website as it was when they last visited it.

Key takeaway 4 - The community is there for everyone

We then came to the lovely Justine Pocock i.e. the person with the best Twitter handle ever! (@wigglykoala) Her talk “How to deal with a life of crazy and keep your cool, mostly”, went through her personal struggles in life and how she was helped by others in the Drupal community.

She pointed out how much she was encouraged by others and more importantly, supported by her peers to make decisions that lead her back on track.

The vulnerability Justine showed was inspiring. It just goes to show the power of Drupal and the community behind it.

Key takeaway 5 - You learn much more from mistakes than successes

There has been many a talk given before about failure; “it’s ok to fail” and “fail fast, fail hard” but none with as much detail as one five minute Lightning Talk did.

The mystery man behind the talk (sorry - I don’t know your name please get in touch if you read this!) detailed some of the unfortunate and hilarious muck-ups that he, or someone he knew, managed to create.

The level of technical detail on his failures and how to avoid them was staggering.

It highlighted that people aren’t perfect and we’ve all made mistakes. Making mistakes can feel like the end of the world - but in reality are usually just funny stories to tell.

This year’s speakers were brilliant.

Conferences are about more than just seeking knowledge from others, they’re also about taking in the state of the community and seeing those around you tackle similar problems. Their approaches could be different to yours, and ultimately improve your problem solving in a real world setting.

We ended the day with a Drupal-ish quiz! A conference wide quiz is a strange beast, but we did well to finish fifth out of 10 teams. Or at least, that’s what we told ourselves.